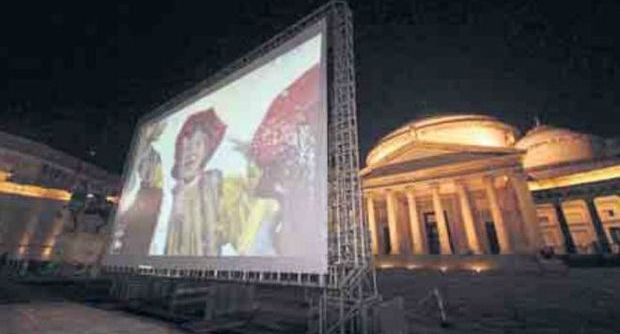 The “hidden” maxi screen installed between the two equestrian statues of Piazza del Plebiscito in 2001 and never been used since then, will be brought back to life for the new year’s eve at Piazza Plebiscito, in Naples.

“The brave workers of Enel Sole (Sagest) have restored it, basically they have brought back life to a corroded object. The maxi screen has a steel structure about 5 metres deep and 60 metres large. Two hydraulic pistons push out the steel frame, which is 10 metres large and 6 metres high, with a  4:3 aspect ratio. The video projector used, which costs about  € 255,000, was the same. The project included a fibre connection between the screen and the control room of Teatro San Carlo, so that the video signal could be transmitted to the square.”